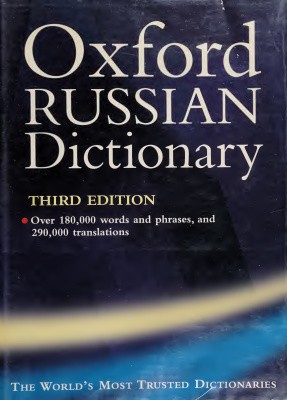 This third edition of the Oxford Russian Dictionary is based on the text of the earlier editions, but it has been enhanced in several important ways. Firstly, while the earlier editions were aimed particularly at the English native speaker, this one has been made much more useful to the Russian native speaker, chiefly by greatly expanding the provision of sense indicators in the Russian-English half of the dictionary, and by providing inflectional information for English headwords in the English-Russian half of the dictionary. Secondly, much more information is now given about American spelling and usage with the labels US and Br. employed extensively throughout the text. This makes the dictionary more user-friendly to it’s American audience as well as benefiting the Russian native speaker who wishes to use or understand American English. Thirdly, the text has been updated to reflect the changes that have taken place in the Russian language in recent years, resulting from the demise of the Communist regime, the introduction of Western institutions and terminology, and the influx of Western goods and ideas. Finally, the entire text has been critically read by Russian native speakers in order to improve the quality of the word list and translations as a whole.