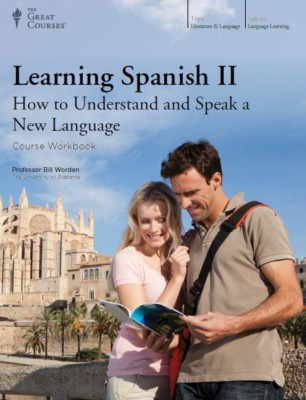 Learning Spanish II: How to Understand and Speak a New Language follows on The Great Courses’ highly acclaimed first Spanish course, taking you to the next level of mastery of this beautiful and incredibly useful language. This exciting program grounds you in the fundamentals that will help you work toward fluency, enhancing your ability to converse with your Spanish-speaking friends and acquaintances, to speak Spanish more skillfully as a traveler—to enjoy the thrill and pleasure of communication in a language spoken by half a billion people around the world.

As in our precursor course Learning Spanish, these lessons, taught by world-class language instructor Professor Bill Worden of The University of Alabama, present a cutting-edge language-learning system that has worked brilliantly for adult learners for over twenty years.

If you’ve completed our first level of Learning Spanish, or have the equivalent of a first-year Spanish course, these 30 lessons will give you the opportunity to practice what you know while advancing into new territory, which will prepare you for more advanced conversations and enhance your ability to express yourself in Spanish on a wide range of subject matter.

Professor Worden’s system makes learning Spanish both fun and wonderfully accessible, and this course is expertly organized to give you the elements of Spanish most vital to daily communication. Within each lesson, you’ll work with three fundamental learning “modules,” each of which builds facility with listening and speaking in Spanish:

Grammar: First, you’ll continue to build the core elements of grammar—the “skeleton” of the language—giving you a solid foundation for using Spanish in many contexts. In each lesson, you’ll build facility with verbs, adding important verb tenses for expressing actions in the present, past, future, as well as the vital conditional tense. You’ll also communicate using the imperative and subjunctive moods, which allow you to express commands, desires, feelings, and states of mind. Moreover, you’ll further your work with adjectives, adverbs, nouns, prepositions, pronouns, and their essential usage.
Vocabulary: An ample vocabulary underlies real fluency, and here Professor Worden teaches you a rich and broad spectrum of words and expressions, reflecting those used most frequently in the Spanish language. Each lesson adds useful new vocabulary to your repertoire, and key lessons delve into specific vocabulary on subjects ranging from health and medicine to money, shopping, cooking, time, family, and more.
Culture: Each lesson grounds you in a knowledge of the Spanish-speaking world, as it applies to using Spanish—the cultures, customs, and ways of thinking that surround the Spanish language. Here, you’ll learn how Spanish differs from English as a medium of expression, and you’ll delve into subjects such as the evolution of the Spanish language, the geography of the Spanish-speaking world, and iconic works of art and literature.

In addition to the core work of speaking and listening, the course gives you extensive practice in reading and writing through the course workbook, which allows you to interact with new vocabulary and grammar in their written forms. Learning Spanish II is designed as a natural progression that gives you the basis for real facility with the language as you work toward fluency in Spanish, enhanced by a host of onscreen diagrams and visual aids.