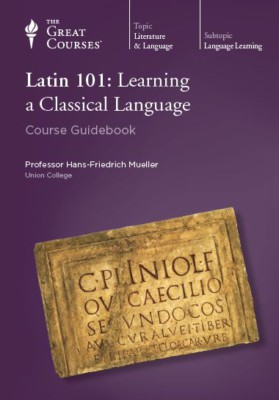 Latin lives! The language of Caesar, Cicero, Virgil, St. Jerome, and countless other great authors is alive and well in the modern world. It lives in the Romance languages, which are the lineal descendants of Latin. It flourishes in English, which draws a major part of its vocabulary from Latin. It thrives in the technical terms of science, law, and other fields. Latin is used in the traditional liturgy and proclamations of the Catholic Church. And it is the language of choice for inscriptions, mottoes, and any idea that needs to be stated with permanence and precision.

Above all, Latin lives in thousands of pages of writings that were preserved from the ancient world—poems, plays, speeches, historical and philosophical works that were handed down for centuries because of their beauty of expression and profundity of thought. These immortal works have influenced everyone from Shakespeare to the framers of the United States Constitution to author J. K. Rowling.

On the other hand, Latin has an undeserved reputation for difficulty. But when taught well, Latin is pleasingly straightforward, logical, and predictable. Each word is like a finely crafted part of a machine—a device that does an amazing amount of work with very few components. Learning to read Latin is immensely rewarding, and it is a discipline that trains, enhances, and strengthens critical thinking.

Embark on this unrivaled adventure with Latin 101: Learning a Classical Language, 36 innovative lectures that cover the material normally presented in a first-year college course in Latin. By watching these entertaining lectures, practicing the drills, and doing the exercises in the accompanying guidebook, you will gain access to some of the world’s greatest thought in its original language. You will also understand why no translation can reproduce the elegance and charm of Latin.

Your guide is Professor Hans-Friedrich Mueller of Union College in Schenectady, New York, an award-winning teacher and textbook author who brings warmth, humor, and enthusiasm to the age-old profession of Latin master. To his students, Professor Mueller is simply Molinarius, which is Latin for his surname, Mueller, which means “miller” in English. Fully equipped to live in ancient times, Professor Mueller speaks Latin using the restored classical pronunciation, which melodiously approximates the way Latin was spoken in antiquity. When he speaks, Latin is indeed alive!

A Course for All Ages

For centuries, Latin was the indispensible foundation for higher education—a course of study that sharpened the mind and paved the way for more advanced schooling in literature, languages, and even mathematics and the sciences. Other courses have since taken Latin’s place in the required curriculum, but Latin remains a cornerstone of Western culture and superb preparation for a deeper understanding of English vocabulary and grammar.

Those who will benefit from Latin 101 include

self-learners and home-schoolers who wish to learn Latin on their own with these 18 hours of lessons and the accompanying guidebook;
those studying Latin in high school or college who seek an outstanding private tutor who knows the most common pitfalls that students face;
anyone who has already taken Latin, even if years ago, and desires a refresher course from an engaging, award-winning professor;
lovers of language, classical civilization, and great literature who aspire to hear and understand the living voice of the ancient world.

Let the Past Speak to You

In Latin 101 you plunge into authentic Latin from the start, becoming part of a time-honored tradition of students unlocking the delights of increasingly challenging extracts of real Latin authors, such as these:

Caesar: Julius Caesar’s Commentaries on the Gallic War describe the great general’s exciting exploits in a clear style without exotic vocabulary. These dispatches helped propel Caesar to a remarkable political career.
Catullus: When asked to speak Latin, Professor Mueller often recites a charming love poem by Catullus. All of the elements that make Catullus one of the greatest poets who ever lived—language, meter, and style—are accessible to you after only a few Latin lessons.
Cicero: Arguably the most influential writer of all time, Cicero left behind works in many different genres. In this course, you study some of the grammatical lessons from his oratory. There is no better guide to the principles for making a persuasive speech.
St. Jerome: For his translation of the Bible into Latin in the 4th century A.D., St. Jerome used the language of the vulgus, or crowd. The “Vulgate,” as it is known, is an ideal text for beginning Latin students. You analyze passages from Genesis and Proverbs.

Your readings also include excerpts from Virgil, Livy, Sallust, Plautus, Martial, Cato the Elder, the Twelve Tables of Roman Law, the Magna Carta, and the Great Seal of the United States, among other passages. In every case, you focus on something specific about how Latin works. For example, Adeste, fideles, the Latin version of the Christmas carol “O Come All Ye Faithful!,” is a superb introduction to the imperative mood.

By the end of the course, you will be translating a long inscription from a Roman funerary monument, which tells a touching story of young love and a married life cut too short. It is a heart-rending message that speaks directly across the centuries, highlighting one of the best reasons to learn an ancient language—so that you can listen to voices from the distant past with understanding and immediacy.

St. Jerome’s Latin version of God’s command in Genesis 1:3 is Fiat lux, “Let there be light.” Two Latin words where English needs four—or even five, since a more accurate English translation is “Let light come into existence.” This vividly demonstrates Latin’s grace, simplicity, and depth of meaning. How does Latin say so much with so little?

The secret is an array of word endings and other seemingly minor modifications that mold a basic word stem to fit a very precise role. For instance, the passive voice is awkward in English and therefore rejected by many writers concerned with style. An example is “I am being driven.” But in Latin you can say the same thing with only one word: agor. The ability of Latin to express the passive voice with elegance makes such forms much more common and useful than in English. The same goes for many other grammatical constructions, which is one of the ways that Latin improves your analytical skills—by allowing you to understand and make distinctions that are difficult to convey in English.

Latin 101 gives you extensive practice conjugating verbs and declining nouns and adjectives to create these meaning-packed words. It is the area in which Latin students have the most trouble, but Professor Mueller makes it accessible, interesting, and fun. Kinetic on-screen graphics emphasize the different forms as Professor Mueller recites them, so that you simultaneously see and hear each Latin word. Then the professor allows a moment for you to say it aloud. The combination of seeing, hearing, and speaking is the ideal way to reinforce language learning. Professor Mueller also reviews material already covered and looks ahead to what you still need to learn before your solid foundation in Latin is complete. Building such a foundation is quite an accomplishment, and the professor knows how to keep you motivated.

Along the way, you explore Roman history, laws, courtship practices, religious beliefs, and other aspects of ancient culture. And you encounter many examples of Roman thought, including this timeless piece of advice from Dionysius Cato, who lived in the 3rd or 4th century A.D. His words apply especially well to Latin 101 and to The Great Courses in general:

“Learn something. For whenever good fortune suddenly departs, skill remains, and skill does not desert the life of a person ever.”